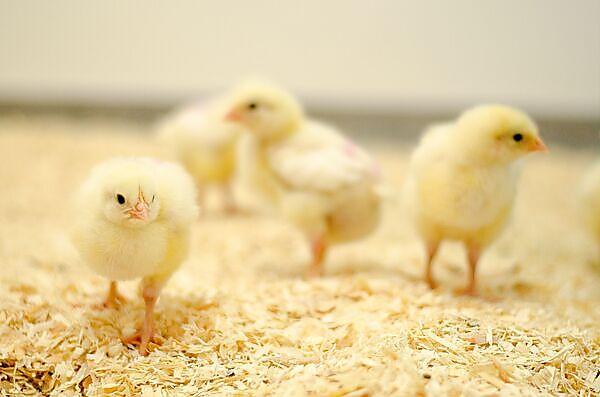 A simple and low-cost method of ‘listening’ to chicks may allow welfare issues to be picked up at the earliest possible opportunity, according to new research.

In commercial chicken farming, thousands of newly-hatched chicks are reared in batches. A team of animal welfare and behaviour scientists from across the UK collected acoustic recordings in 12 typical such flocks of 25,000 chicks.

In nature, when uncomfortable or uncertain of their surroundings, chicks would attract the hen with a loud and distinctive distress call.

In this study, the researchers demonstrated that these calls could be clearly picked up above other noises such as regular calling and farm machinery.

But where previous research has linked distress calling to stress and anxiety-like states in chicks, this study also shows it could predict flock-level behaviour, future growth and mortality rate.

That suggests distress calling may be an ‘iceberg indicator’ – a single measure that captures a range of welfare information at once.

The study, published in the Journal of the Royal Society Interface, involved researchers from the University of Plymouth, University of Roehampton, SRUC, and Newcastle University. It was funded by the Biotechnology and Biological Sciences Research Council in an Innovate UK partnership with Greengage Lighting Ltd.

Lead author Dr Katherine Herborn, Lecturer in Physiology and Behaviour at the University of Plymouth, said:

“On their first day in a barn, all chicks are going to call because they are in strange surroundings. But after that they learn where to find food and water and settle into that new world, so if you are still hearing a lot of distress calling after a few days it could be a sign there is something wrong. With over 50 billion birds being produced each year, tools to support simple interventions at the right time could potentially have big impacts on welfare and quality of life for these birds.”

"By analysing the calls chicks make in their first few days of life, it seems we are able to predict weight gained and the number of deaths in the whole flock for the whole life. This means we could have a very powerful tool to help chicken welfare. What is particularly useful is that this welfare indicator can be used early on in life, whereas most chicken welfare indicators are taken later in their life when it is too late to make major improvements. As an added benefit this study shows how we can measure chick calls automatically, meaning no extra work for farmers, but more information to help them improve chicken welfare."

The method used in the research involved measuring the ‘spectral entropy’ of the soundscape –a value that describes how sound can vary from a clear, tonal note up to white noise.

As increasing numbers of chicks call in unison, the usual background noise of the farm becomes overall more tonal. This computationally simple way of counting distress calls could act as an early-warning signal to farm staff that chicks require attention and ultimately improve chick welfare across their lifetimes.

The findings support previous studies on the benefits of automated monitoring of livestock for real-time warnings of emerging welfare concerns. They also emphasise the importance of using animal-centred behavioural and emotional welfare indicators alongside traditional environment and productivity monitoring on poultry farms, to improve conditions from the birds’ own perspective.

Dr Alan McElligott, Reader in Animal Behaviour at the University of Roehampton, added:

“The results of this research show how useful vocalisations can be for monitoring welfare, and especially in an age when animal welfare needs should be central to progress in precision livestock farming.”

The full study – Herborn et al: Spectral entropy of early-life distress calls as an iceberg indicator of chicken welfare – is published in the Journal of Royal Society Interface, DOI: 10.1098/rsif.2020.0086.

School of Biological and Marine Sciences

Plymouth offers a friendly, exciting and supportive place to study biological and marine sciences. Our staff are world-leading experts who are passionate and committed to both their research and teaching.

Find out more about biological and marine sciences

Our staff and postgraduate students are involved in a wide range of relevant research. We are closely linked with the following research groups: